In this experiment a fully enclosed, electrically driven gyroscope is released to fall freely under the influence of gravity. The elapsed time taken to fall a measured distance of 10.617 feet was measured, with the rotor stopped and also with the rotor spinning at approximately 15,000 RPM.

Data was gathered on a Chronometrics Digital Elapsed Dime Clock measuring 1/10,000 second, actuated by two phototransistor sensors placed in the paths of two light beams which were consecutively interrupted by the edge of the casing of the falling gyroscope.

The gyroscope, of total weight 7.23 lbs (rotor weight 4.75 lbs, case weight 2.48 lbs) was released to fall along its axis. Electrical leads supplying power to the 41/4" diameter rotor were disconnected just prior to release. 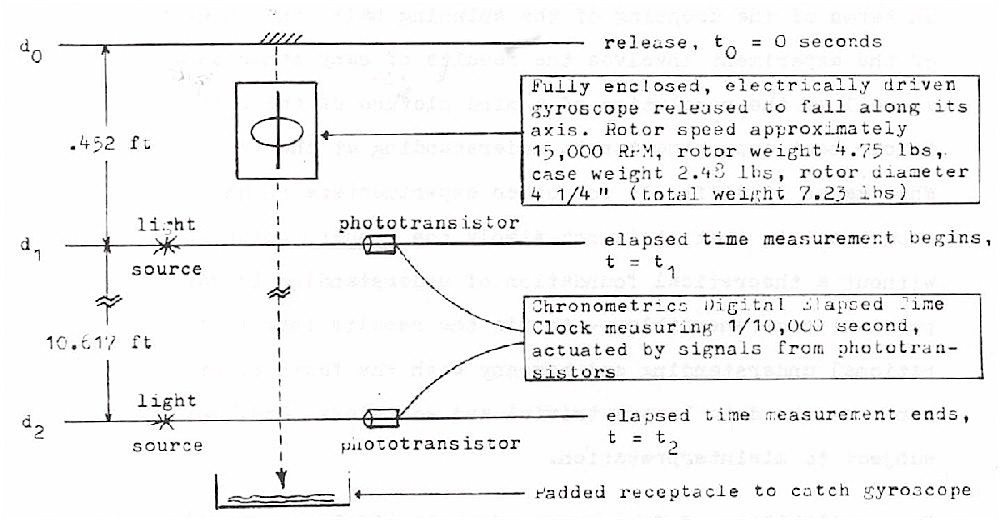 
A hypothetical, fictitious force increment which would have to be applied to the non-rotating gyroscope to impart the increased acceleration noticed in its rotating mode, was calculated for comparison purposes. 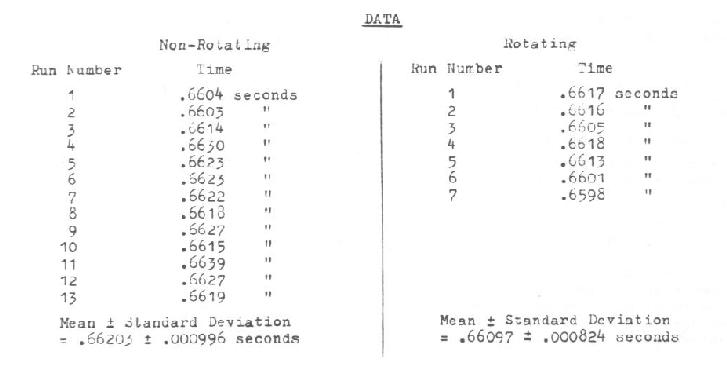 On the basis of the Standard Deviations of the data from this experiment, one can say with a 97% level of confidence that a fully encased, spinning gyroscope drops faster than the identical gyroscope non-spinning, when released to fall along its axis.
APPENDIX


The following are calculations performed on the measured data to arrive at the values given in the Summary of Experimental Results (above).

a) Calculation to find velocity v1 at beginning of elapsed time measurement for the Non-Rotating gyroscope, using the equation

d = vi t + 1/2 at2 , with
b) Calculation to find the distance between release position and beginning of elapsed time measurement segment for the Non-Rotating gyroscope.
vf 2 = vi 2 + 2ad , with

d) Calculation to find total time taken to fall total distance for the Non-Rotating condition of the gyroscope.

h) Fictitious Force Increment: Calculation to find a hypothetical, fictitious force increment which would have to be applied to the Non-Rotating gyroscope to cause the increased acceleration observed for the Rotating gyroscope. The mass (m) of the gyroscope is assumed not to have changed, for the purposes of this calculation. Using the equation: F = ma

a ratio is set up:

The fictitious force increment is:

Back to the Homepage